American Beach was founded in 1935 by Abraham Lincoln Lewis and the Afro-American Life Insurance Company, as a place where African-American individuals could enjoy “recreation and relaxation without humiliation.” The American Beach Museum was established on September 6, 2014 to honor the history of the beach, and they have done so every day since.

On Thursday, December 12th, all attendants will gather at Walker’s Landing in Fernadina Beach to honor the life of the great-granddaughter of American Beach co-founder Abraham Lincoln Lewis, the inspiring Dr. Johnnetta Betsch Cole.

To further ensure this elegant event won’t soon be forgotten, this year’s anniversary celebration will be hosted by Danny Glover, an award-winning actor, director, and activist!

Those who wish to attend either of these festivities can buy tickets to each event individually. Ticket prices range from free admission to $125 for Thursday’s “A.L. Lewis Legacy Awards” ceremony hosted by Danny Glover. The black-tie-optional awards will include an opening reception, followed by a champagne toast, jazz performance, dramatic reading, and a vocal performance by Alyson Williams.

The Spohrer Dodd team is honored to be a part of the American Beach Museum’s celebration of history and culture by serving as a sponsor. Thanks to everyone who has contributed to the museum in the past five years and helped to make this event possible!

To learn more about Spohrer Dodd’s legal services and to schedule a free consultation, use our contact form or call (904) 637-7721. 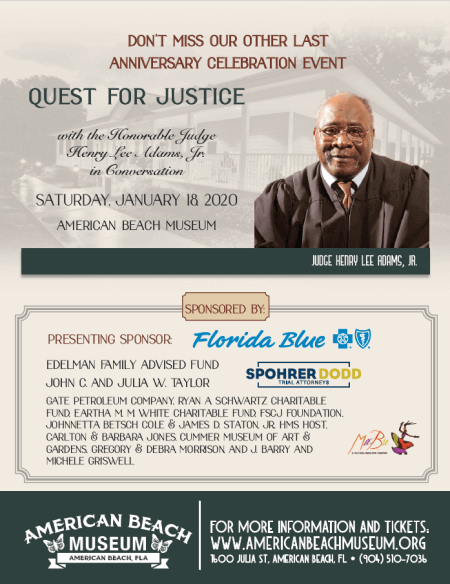